This community development is located towards the North West of Alviera in the first-class municipality of Porac, North of Manila. In terms of accessibility, the mountainside community boasts of elaborate road networks and an air base.

Clark Air Base which is located on Luzon Island about 3 miles west of Angeles and 40 miles to the North West of Metro Manila is within close proximity (21 kilometers) to Montala Alviera.

There is also Subic Bay Freeport Zone which is locally abbreviated as Subic Bay. This is a former military base which was converted into a tax and duty-free zone under the management of Subic Bay Metropolitan Authority. It is located south west of Luzon Island facing the picturesque Zambales Mountain Range. The distance from Subic Freeport to Manila is about 110 kilometers. It is considered one of the engines for economic growth and development. The community development is 45 minutes away from Subic Freeport.

Subic Clark Tarlac Expressway (SCTEX) is a 93.77-kilometer 4 lane expressway located North of Manila. Its construction began in 2005 and ended in 2008. The expressway serves major cities including Mabalacat, Olongapo, Angeles, and Tarlac City including towns such as Porac, Hermosa, and Floridablanca. To the south, this expressway connects with Subic Bay Freeport. Together with NLEX, SCTEX provides seamless transport to people around here. This broadens the horizons for families and opens up neighboring regions.

Angeles, one of the highly urbanized cities in Philippines is just 20 minutes away from the development. The city has an estimated population of 411,634 as of the 2015 census. It is one of the busiest in Pampanga and was ranked the 15th best place to live in Philippines according to MoneySense Magazine. Its economy is powered by the Clark Freeport Zone and the Clark International Airport. Tourism and the nightlife industry are the mainstay of Angeles.

San Fernando, a first-class component city is located 23 kilometers to the south east of Montala Alviera. According to the 2015 census, the city has a population of approximately 306,659 people and lies 66 kilometers north of manila. It is famous for the Giant Lantern Festival which is an annual festival featuring a competition of Giant Lanterns held in December just before the Christmas eve. Its strategic location and the fact that it has a lot of commercial activity going on makes it a major determinant of development around Pampanga. For instance, the city boasts of 39 banks, 2 public markets, 48 lending institutions, and 39 public and private schools. There are also hotels, hospitals, government factories, and supermarkets in the city.

The other city whose growth and prosperity has a huge impact on Montala Alviera is Quezon City. It is ranked as the most populous in the Philippines and was named after the second president of Philippines, Manuel L. Quezon. The city is characterized by high-rise buildings and shopping malls in its commercial center located in Cubao. There are lots of educational institutions, hospitals, and other amenities that one would expect to find in a fully-fledged city. Quezon is 95 kilometers away from Montala Alviera.

One of the renowned shopping malls is MarQuee Mall which is fully owned by Ayala Land. It sits on 9.3 hectares of land area and its floor area measures 140,000 square meters. It houses over450 restaurants and shops and has a parking lot which accommodates over a 1,000 vehicles.it is located 23 kilometers from Montala Alviera. 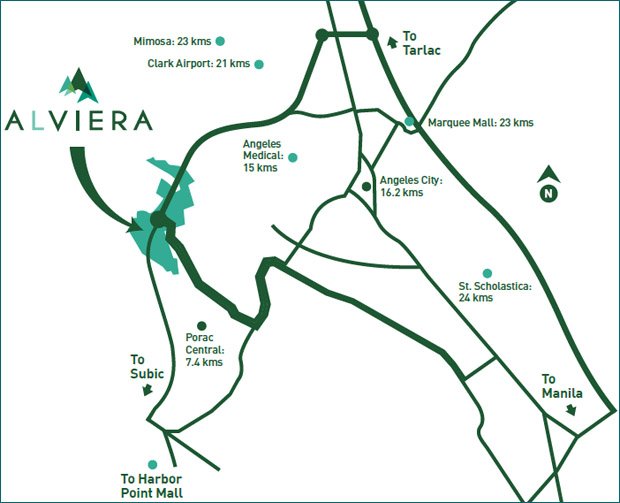 Montala is located in the north-west of Alviera in Porac, a first-class municipality in Pampanga. Among Alviera’s hallmarks as a new urban hub, is its promixity to established cities — the bustling Angeles City a mere 20 minutes (or 16.2km) to the northwest, and it is just under half an hour’s drive (or 23km) to the capital city of San Fernando to the southeast — as well as its accessibility via major highways like the SCTEX and NLEX, and local roads. It is approximately one hour and 15 minutes (or 95km) from Quezon City, and five minutes (or 21km) away from Clark International Airport. The drive from Alviera to Subic takes approximately 45 minutes (or 63km). Alviera, Brgys., Hacienda Dolores and Banaba, Porac, Pampanga.